A Minute For Madeleine 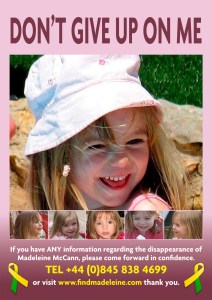 3rd May 2011 is the fourth anniversary of the disappearance of Madeleine McCann.

Like most parents, my heart stopped when I heard about the disappearance of Madeleine on the 3rd of May 2007.

Like most people I hoped desperately that she would be quickly found, that she’d  maybe wandered off to a playground or gone in search of her parents. A million thoughts whirled through my mind. The thought of that moment of coming home to find your child missing…

I’ve tried really hard not to have an opinion on the circumstances surrounding her disappearance – would I have left my children of that age alone so that I could go to dinner? – no I would not – but that doesn’t mean that they or indeed she deserve what happened.

There is currently still NO legal minimum age at which you can leave your children.

Legally the position is: There is no legal age limit for leaving a child on their own, but it is an offence to leave a child alone if it places them at risk. Parents can be prosecuted if they leave a child unsupervised ‘in a manner likely to cause unnecessary suffering or injury to health’ (Children and Young Person’s Act).

Or I could have said: Legally the position is a complete cop out! 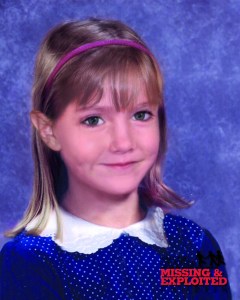 I don’t want this to be a long post, just want to keep up the awareness in case this young lady is still out there. On the McCann’s official website they have some age enhanced images of what Madeleine may look like now.

A quick google search will fill you in on the many, many theories about what really happened that night. There is a huge amount of speculation that her parents know exactly where she is. That makes me feel sick to my stomach, I can’t believe that is really the case? I happened to be on holiday there very shortly after her disappearance, the town had a very eerie feel to it. Praia Da Luz is a beautiful place upon which this event will have permanently left it’s mark.