D is for… Dealing with Debts

If you are in debt and feel that you need some help, I hope that reading this will reassure you and offer some useful suggestions.

If you’ve read A is for… And then he left me you will recall that my ex husband left me quite hideously in debt. This was in 2004 which was just before the bankruptcy laws changed – I have to say if it happened to me now, rather than then, I would given serious thought to going bankrupt. Even in 2004 (when the after affects of bankruptcy were much harsher) every debt advisor I spoke to told me to file for bankruptcy.

So, he left on 9 July 2004 (the night before our youngest son’s 3rd birthday). I had no warning of this and, although people find it hard to believe, I had absolutely no idea that it was going to happen.

I knew we had debts, money had been somewhat scarce for several years as he had been frequently ‘off sick’ with a bad back and depression. We had re-mortgaged the house several times, once to consolidate all the debts – except that when the money came through he managed to convince me that he NEEDED some tools (although only dewalt ones obviously), that he DESERVED a playstation, and an x-box, and some games, and some new clothes, and we NEEEDED a new lawn mower etc. So only a small amount of debt ever got repaid.

His attitude to money was always poor. Even when he wasn’t working he would think nothing of spending £5 on a playstation magazine and then say that we couldn’t afford proper  nappies. I stood at the checkout in tesco more times than I care to remember with flaming red cheeks when my debit card was rejected, because he had withdrawn cash to spend on HIM without telling me and without caring if it left enough money for bills and food.

My mum set up a bank account and started paying £20 a month into it, she said it was for me to treat myself with, I didn’t tell him about it, it didn’t seem deceitful as I only ever spent the money on food shopping anyway. Once when I went to withdraw the £20 to use for shopping I was stunned to see there was no money available – when I checked further I saw that the £20 had already been withdrawn. I asked him about it, he said that found the card in my purse and we’d needed milk so he took the money out. The pin was my birthdate – he had guessed it. From then on he would wait for that £20 to land and whip it out straight away. He often drove to the cashpoint at just gone midnight to make sure that HE got the money.

Below is a list of the debts I was left with, this is just from the paperwork that I can find now, I think there were more:

As you can see, even with just the debts that I can remember, I was left with £36,016.49 of debt outstanding which cost me £20,082.61 to pay off. I’m pretty sure the total amount I spent paying off debts was closer to £28K so there must be a few that I’ve missed. It took me 6 years – the last debt was cleared in February of this year.

My ex took one debt, an Abbey National current account overdraft of around £700. This was in joint names but he made me sign the account over to him so that he still had a bank account – this, of course, left me without one and with a completely shagged credit rating which meant that I couldn’t get one.

I didn’t answer my home phone for several years unless I was expecting a call, as most of the time it was a debt company chasing money, I still find it hard to answer it now. Some companies are ok to deal with – some are terrifying.

What makes it even more complicated is that most companies sell on debts, meaning that it was almost impossible to keep track of who I had paid what to – I’m quite sure that I repaid some of the debts twice! For example – the £1,840 debt to Barclays was at one point being chased by Aplins Solicitors, DLC (Direct Legal & Collections), Hillesden Securities Ltd, Buchannon Clark & Wells and Ruthbridge Ltd. That is 5 different companies all chasing 1 debt. All 5 companies claimed theirs was a different debt and that I HAD to deal with them. Sometimes they phoned, sometimes they wrote, sometimes they sent baliffs round – mostly it was a combination of all three methods. Like most of the debts, this particular one was a joint debt so I gave all of them my ex’s details too – I had to laugh one day when a guy from Buchannon Clark & Wells rang me to say that he thought my ex was a complete c*** and that he knew someone who could ‘have a word’ if I wanted him too… Even funnier when my ex rang me the same night in a right state to say that he had just received a threatening phone call and it sounded just like the guy from BCW…

The point of this post is twofold, one to say don’t ignore your debts. They truly don’t go away they just get bigger and more unmanageable. Get a copy of your credit file – this is a huge step towards taking control, yes it will probably tell you things that you don’t want to know, but do you know what? The debts are there whether you acknowledge them or not! You can get one month’s free trial from Experian. Get an A4 ring folder and some dividers and make a file for each debt, then make an appointment to see a debt adviser. A FREE one like the CCCS. DO NOT PAY ANYONE TO ‘SORT OUT’ YOUR DEBTS! Either phone them or write to them asap. Tell them you are experiencing financial difficulties. Tell them your income and your outgoings – make sure you include everything that you have to pay out for. They will help you. If you have some money to repay a debt, NEVER repay the full amount – always offer a reduced settlement figure – 99% of the time they will either accept it or negotiate. 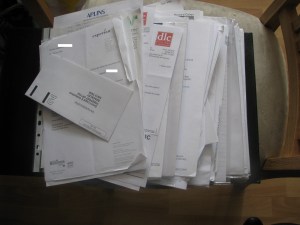 Secondly – do not let your solicitor leave you with all the debts! I am so angry that my solicitor allowed me to be left in this situation. Now, 6 years on, my debts are all repaid. I will never have an overdraft or a credit card again, ever. I won’t let my new husband have them either. It isn’t always easy like living like that but we do. We currently rent a house as we now have to save up a deposit to buy, this has set me back massively in terms of ‘steps on the ladder’.

But, having said that, the past is all behind me now, I’ve learnt from it and I can concentrate on the future.

I am very happy to try and help if you have any queries that you think I may be able to answer – just let me know on the comments section below and I will reply to you.

UPDATE – 2oth May 2010 – To answer some questions that have arisen from this post:

1. The negative equity was from a flat that I owned before I met my ex. It was rented out but I had a few problems with tenants and often  had to meet the mortgage payment on that as well as on the house I shared with my ex. When he stopped working for frequent and ever increasing periods, my salary was insufficient to pay both mortgages. He persuaded me to hand in the keys – the second biggest mistake of my life – if I still had that flat and sold it today it would net me 85K profit.

2. All of the debts except the dorothy perkins/debenhams cards were in our joint names. However due to joint and several liability the debt companies had the legal right to pursue me for the entire debt. They chose to do that as because as a mother of 2 young children I was an ‘easy target’, threatening phone calls and visits from big scary men terrified me.

R is for… Random Acts of Kindness – Pay It Forward

O is for… Online Dating tips