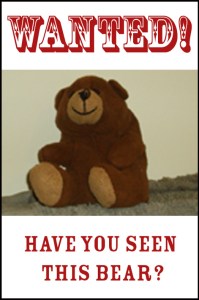 When my youngest was 6 months old we went for one of our regular walks round Colchester Zoo and out through the gift shop. My slightly older son had a habit at the time of collecting plastic animals – we had zillions of them – but youngest son had never really shown much interest.

On this day however, youngest son reached out and plucked a bear off the shelves.

From that day onwards, he and ‘Bear Bear’ were inseparable. Youngest son turns 9 in a couple of weeks and even now Bear Bear goes to bed with him every night.

When Bear Bear needed washing I went back to the Zoo and bought a second bear (Spare Bear) and for a while I got away with swopping the bears.

One weekend when my ex husband and his then girlfriend had the boys, they returned them home without Bear Bear. Youngest son was devastated. Ex husband claimed he was ‘lost in town’ and they had been back to every shop but the bear was no where to be seen.

The next morning I started phoning shops. I rang and continued ringing until I found a shop who said ‘yes, we had a bear left here yesterday’. And so I picked up the bear.

As time has gone on and other toys and computer games have competed for attention, it would seem that Spare Bear has been well and truly lost.

We do still have Bear Bear, but, youngest son has a few abandonment issues and he gets quite sad about the lost bear. He sometimes is tearful at bedtime because ‘he thinks Bear Bear is sad about missing his family’, it is quite heartbreaking.

I have appealed in the newspaper, via KidAround magazine, on a ‘toys reunited website’ and I’ve rung Keel Toys and I’ve been back to the Zoo. It would seem there are no more Bear Bears to be found! After the appeal in KidAround a very lovely lady did contact me and say she had a Bear Bear – I went straight round and it turned out to be a mini-Bear Bear. Youngest son was delighted but he was still sad that we hadn’t found ‘Bear Bears family’. 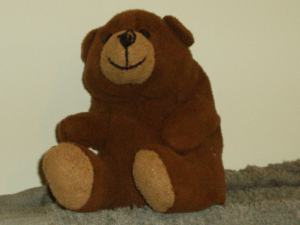 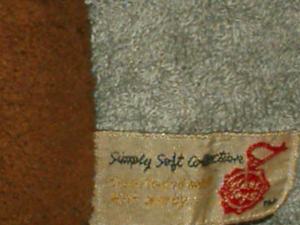 So this is a last ditch appeal. It would be just amazing if I could find a bear (in any condition) for him for his birthday. Can the power of twitter find that person who has a tatty old brown bear tucked away in a cupboard? Fingers crossed.

V is for… Vegetarian