Posted on 25th September 2012 in #bookreview 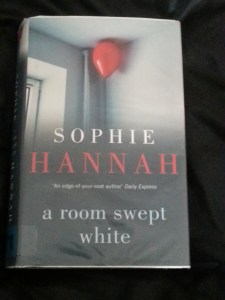 TV producer Fliss Benson receives an anonymous card at work. The card has sixteen numbers on it, arranged in four rows of four – numbers that mean nothing to her.

On the same day, Fliss finds out she’s going to be working on a documentary about miscarriages of justice involving cot-death mothers wrongly accused of murder. The documentary will focus on three women: Helen Yardley, Sarah Jaggard and Rachel Hines. All three women are now free, and the doctor who did her best to send them to prison for life, child protection zealot Dr Judith Duffy, is under investigation for misconduct.

For reasons she has shared with nobody, this is the last project Fliss wants to be working on. And then Helen Yardley is found dead at her home, and in her pocket is a card with sixteen numbers on it, arranged in four rows of four . . .

I find Sophie Hannah to be an outstanding writer, her plots are often brave and touch upon subjects that most authors would leave well alone. A Room Swept White is a classic example of this as all the way through the book you have the much deeper unspoken subplot of whether or not you, the reader, believes that the three women killed their babies.

Sadly for me the book was lacking key characters to carry such an amazing storyline.

The Simon Waterhouse, Charlie Zailer and Proust relationship has become farcical. Such a shame as a few books back it was brilliant. Now Zailer is basically kept in a box until the author needs her for something, Waterhouse has become borderline psychotic but with none of the charisma which would normally accompany such a role and as for Proust, well, I’m a bit lost for words.

The worst thing for me was the way that the story seemed to jog along with lots of ‘is it this person, is it that person’ and then all of a sudden it felt as though the allocated number of words had been completed therefore, like a magician pulling a rabbit out from a tatty hat, the murderer is revealed and a few other loose ends are randomly and unbelievably tied up all in the space of about 4 pages.

The Silence by Alison Bruce #BookReview

What Happens When The Rescue Centers Are Full? #CharityTuesday