Birthdays for the Dead #BookReview 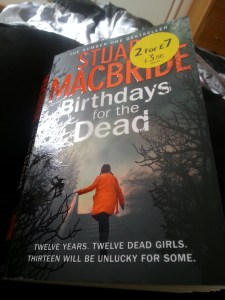 Birthdays for the Dead

The synopsis bit: Five years ago his daughter, Rebecca, went missing on the eve of her thirteenth birthday. A year later the first card arrived: homemade, with a Polaroid picture stuck to the front – Rebecca, strapped to a chair, gagged and terrified. Every year another card: each one worse than the last.

The tabloids call him The Birthday Boy. He’s been snatching girls for twelve years, always in the run-up to their thirteenth birthday, sending the families his home-made cards showing their daughters being slowly tortured to death.

But Ash hasn’t told anyone about Rebecca’s birthday cards – they all think she’s just run away from home – because if anyone finds out, he’ll be taken off the investigation. And he’s sacrificed too much to give up before his daughter’s killer gets what he deserves.

I have given this book 5 starts (out of 5) on Good Reads because, frankly, it kicks butt! I think it would make for brilliant TV.

DC Ash Henderson is policeman on the edge and he makes for a fantastic character. I started off missing Logan McRae and the well-known, well trodden streets of Aberdeen but was soon sucked into the downright murky world Ash and his faithful sidekick Rhona. I didn’t like the Dr McFruitloop character when she was first introduced, felt she was a little too contrived, but I grew to love her after a couple of chapters.

I should add that before anyone reads this book they need to be fully aware that the subject matter is grim beyond all measure. It is painful to read and certainly not for the feint hearted. It goes WAY beyond the usual line in the sand for describing atrocities and if you look directly at it you’ll struggle to read on! I tend to read the words but ignore the content when he’s talking about the girls.

This book doesn’t confirm to the norm. It doesn’t do as you expect it to. MacBride has been brave enough (bored enough?) to throw the crime writers rule book out of the window and he has written an outstanding standalone book which is like no other.

DC Ash Henderson is a ridiculous yet fantastic character. He does not abide by the rules – most similar characters fly close to the wind, or bend the rules but he does not have any boundaries not a single one. It is exhilarating to read about someone who just does want he wants/needs in order to get what he wants.

This book seems to have been somewhat slated on Amazon and I think a lot of its critics were expecting a fluffy crime book that follows the crime-by-numbers format of some other writers. It is hard reading in places. The pace does move so quickly that you literally feel your head spinning. It is down right gritty, grim and unbelievable; yet FABULOUS.

Having said that, I’ve gone from this to the slightly more frothy Notting Hell as I felt I needed to wash all of the macabre grimness out of my system!

The Woman Who Went To Bed For A Year #BookReview