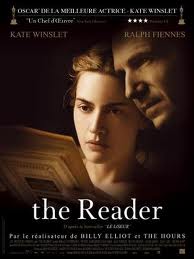 The synopsis: For 15-year-old Michael Berg, a chance meeting with an older woman leads to far more than he ever imagined. The woman in question is Hanna, and before long they embark on a passionate, clandestine love affair which leaves Michael both euphoric and confused. For Hanna is not all she seems. Years later, as a law student observing a trial in Germany, Michael is shocked to realize that the person in the dock is Hanna. The woman he had loved is a criminal. Much about her behaviour during the trial does not make sense. But then suddenly, and terribly, it does – Hanna is not only obliged to answer for a horrible crime, she is also desperately concealing an even deeper secret.

He was fifteen she was in her thirties. All obvious and disappointing jokes to one side, if this were a fifteen year old girl and a man in his mid thirties would it be ok?

I did read the rest of the book as was required and with the exception of the above noted scenes it was a good, though provoking book.

It left a lot of things unanswered and, for me, it had some pretty huge plot holes which I’m told are conveyed better in the film.

I don’t feel as though I can offer any more of a review than that; for me the book was tainted by its opening scenes.