I’m putting together an entry for ‘Summer Shorts’ which has a domestic violence theme (I’ll share that too once finished), as such I have found myself researching a few things and came across an article regarding a change in the law which means any psychological abuse is also now illegal – a new crime of coercive control, introduced in December 2015, widened the net to cover a host of other types of domestic abuse.

Did you know your partner can no longer legally do the following things:

3. Continually put you down.

4. Stop you seeing friends and family.

6. Threaten to reveal private things about you.

7. Use tracking software on your phone.

9. Make you obey their rules.

10. Control what your wear.

More details are included in the following article https://www.cambridge-news.co.uk/news/uk-world-news/domestic-abuse-partner-cant-do-14543776

If you have any worries about your relationship, please seek advice https://www.refuge.org.uk/

Having suffered at the hands of the CSA I was actually quite pleased to hear that a new child maintenance service was being set up. Not so naiive as to believe that they’d be able to retrieve any payments from my ex-husband, obviously, but I did feel a glimmer of hope that they might have a more professional approach and greater powers available to them.

It took an inordinate length of time for me to be able to transfer to the new service. This isn’t optional by the way, they just close your existing CSA case on an arbitrary date and unless you set up a new account with the CMS then that is the end of that and your ex gets away Scott free.

So, I jumped through the various hurdles to set up the new account and was advised during these conversations (it doesn’t take just one phone call, obviously) that they would take over and start afresh. As such I was asked if I wanted the arrears to be carried over or wiped off? Seriously, does anyone elect to wipe them off?!

Anyway, back to now, finally, finally, in March I received notification that they had decided what payments should be made and that I would receive the first payment on April 1 (I know, I know). Needless to say no payment has arrived. So I’ve phoned them today (twice, as the first time I failed their security questions…) and discovered that they felt I should have provided my ex-husband with my bank account details.

Besides the fact that they had never asked me to do this and had, in fact, in January advised me that they would not expect me to do this given our history. Which the guy I spoke to today agreed was in the case notes, but said it was wrong and that I should never had been told it.

Their suggestion now is that I open a new bank account purely for receiving CMS payments. I asked if they’d actually had any contact with my ex and had any agreement that he would make payments? No, they said, but we have to give him the chance to.

Because 12 years of dodging payments isn’t enough of chance is it; let’s give the fella one more go huh.

I’ve not encountered the column of Liz Jones before but after reading her post about ‘mummy bloggers’ I took a quick glance through the titles of some of her other posts and found myself reading the recent work of a woman who seems to have grown a career out of her feelings of jealousy, resentment and general inadequacy.

My overriding thought when I see stories attacking bloggers, is ‘what does it matter to you?’. As in why does it affect the writer so badly that they feel the need to hurl abuse.

Comparing the comments on this post to some of her others I can see the answer. Over 300 people have taken the time to comment, while this is the case then there is a point to her employment. While her articles produce such a tidal wave of response there is a justification for her writing them.

I personally quite liked her comment that the blogging world had become like an extension of the WI. I’m not sure she meant it to be taken as a good thing but what a lovely idea.

Cambridge Mummy has taken the time to respond and rightly so, especially as she’s been named as a SAHM who is supported by her husband and makes money selling advertising on her blog – none of which is actually true! Facts, it seems, aren’t as important as mudslinging.

I read Liz’s column without surprise, it’s been said before, all of it. The way she wrote it, however, just screamed of jealousy. There was one bit in particular, where she spoke of maternity leave as ‘a holiday’ which I think probably goes some way towards explaining her need to attack; she feels that she’s missed out, she feels cheated.

Clearly her directive from the Daily Fail is to be as controversial as possible, to stir up a storm in a tea-cup wherever she goes, to use her myopic view of the world to create discourse and, essentially, to go into the playground and start a fight.

I’m glad I didn’t know who she was before today and I’m glad that after today I am very unlikely to read anything of hers again.

Does YOUR child use the school toilets? 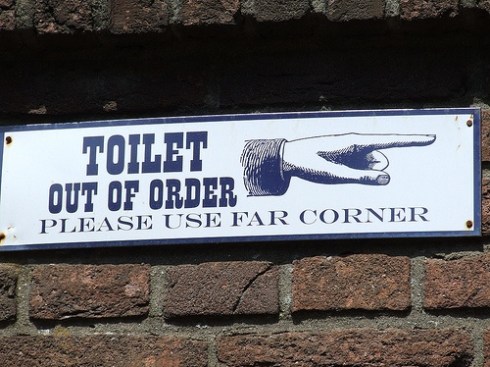 I’ve noticed that when I pick my boys up from school they are always busting to use the toilet.

I hadn’t really thought anything of it until I jokingly said to my oldest “What’s wrong the the loos at school?”

and he replied “I never use them.”

When questioned further he had several reasons for not using them:

– fear of ‘getting pranked’

– lack of privacy as the cubicles are open top and bottom

The end result being that he goes from 8.15 am to 3.30 pm without going to the toilet which simply can not be good for him!

I’m horrified that he is doing this and also quite sad that he doesn’t feel that he can safely use the school facilities. He tells me that hardly anyone uses them for the same reasons.

When your children come home from school – please ask them for me if they use the school toilets?

Bullying someone is such a despicable thing to do and the effects of it can remain for many years after the bullying has stopped. It can often go ‘un-noticed’ either because people turn a blind eye or because the victim feels too scared or even ashamed to speak out. Fortunately there are many anti-bullying campaigns and a greater awareness of the problem. Today, for #CharityTuesday, I’d like to hand you over to the Red Balloon Learner Centre Group to explain what they do:

Red Balloon was founded in 1996 by Dr Carrie Herbert when a parent of a thirteen year old girl, who had attempted suicide because of severe bullying, contacted her. Following that meeting Red Balloon was established, operating for over seven years in the founder’s house before moving to its own premises in central Cambridge.

Today there are five further Red Balloon Centre, in Norwich, NW London, Merseyside, Warwick and Reading, each with a capacity for fifteen eleven to seventeen year olds.  Children attend daily and receive a full-time education comprising 60% academic studies and 40% well being, counselling and the creative arts.  This has proved to be a successful programme and 95% of the children who stay longer than six weeks return to school, move on to college or find employment.

Until recently there have been no published estimates of how many children in the UK are unable to go to school because they have been badly bullied.  In 2010 Red Balloon commissioned the first national survey to ascertain the number of students absent from school because of bullying; the findings estimated that over 16,000 children aged between 11 and 15 are missing education.  Frightened, humiliated, ostracised, beaten up and threatened, they stay at home, often under their duvet.  Over time, away from education, with no social contact, their self esteem is further eroded and they become suicidal, self harming, depressed, often having to endure other problems such as post traumatic stress disorder, panic attacks, eating disorders and social phobias.  However, these children are eminently recoverable given the right environment and, if given an appropriate education and recovery programme, will go on to lead fulfilling and worthwhile lives.

Red Balloon has recovered over 180 in the past fifteen years.  This year across the centres we celebrated the recovery of 22 students, 14 of whom either returned to mainstream school or moved on to sixth form college, and three entered employment or apprenticeships.

This year Red Balloon has launched a new initiative called Red Balloon of the Air, a virtual Red Balloon which provides distance learning, a virtual world, one to one tuition and on-the-ground support from a local teacher.  New Centres are planned for Braintree, Greater Manchester, the North East and South Yorkshire.