My boys have come out with some strange ideas over the years. Always so logical when you sit and think about them, mostly everyday things which we just take the meanings of for granted. Children have minds that are free of logistics so their thoughts are often quite enlightening.

DS1 says he always thought that women had HAMbags….. and could never understand why.

DS2 says he was nervous the first time we moved house as he thought that men would literally come and pick up the house and carry it to a new position.

Then there are the mispronounced words. We tend not to correct them to start with as it’s cute and we want other people to hear it. Then suddenly they become too old for it to be cute – people may think they aren’t bright…..

DS2 had a tobogganing party at the weekend – except that he told everyone it was ‘tabogolling’.

I was on holiday a few years ago and there was a young Irish girl in the shallow part of the pool. She had arm bands on and was laying on the stomach, I creased up laughing when she suddenly yelled “Mammy, mammy I’m a mermlaid”.

When I was a child I used to think that the radio station broadcast songs as they were played, so in my head every time a song finished that band would then pack up and leave and a new one would set up to play their song! Made it much more exciting thinking every song was live…..

They are also free from social embarrassment. I remember being in Tesco with DS1 in the trolley seat when suddenly he started loudly saying “Brummmm Brummmmm BRUMMM!” when I looked round there was a guy behind me in a wheel chair.

Then there is that first occasion when you walk towards a man with a giant beard, or a very fat person, or anyone who is in anyway different to ‘the norm’, you clutch your child’s hand tighter and try to talk cheerily in a much louder than normal voice in the hope that you’ll get passed them without a very loud “Mummy, why has…..?”

What gems have yours come out with? 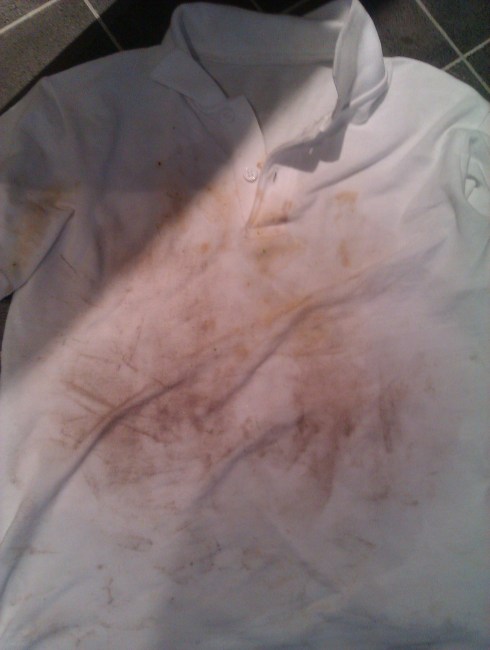 I swear I keep the Polo Top and Laundry Spray companies in business! This top was brand new out of the packet this morning, spent 6 hours at school and came home like this!

When questioned, DS2 did reveal that the Bagley Ball ‘may have got muddy’…..