E is for… Elvis 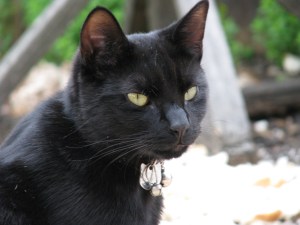 Elvis is one of my cats. We got him from a rescue centre and he is a jet black cat. The children and DH wanted a different cat but I know that black cats often get left behind at rescue centres as people don’t think they are pretty. Being a sucker for a sob story it was therefore inevitable that I would be going home with a black cat. Personally I do think that my mini-panther is beautiful and he inspired my one and only ever Hiaku (at least I think it is one, be kind if I’ve messed up?).

Should point out here that while I am a sucker for a sob story I am also not a saint and my 2nd cat is a pretty little torti-tabby called Maisy! 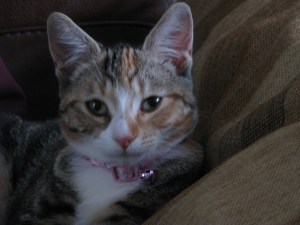 Elvis may not deem himself a ‘lucky’ black cat as since we’ve had him he has had 2 major accidents.

Accident 1: 1 day a week I work late, on that day my mother collects my 2 DS from school and takes them for dinner at sainsburys (for some reason she won’t cook for them) on these days she thinks nothing of texting to me to ask ‘need anything from sains?’ or similar. However on this particular day I heard nothing from her. Then at about 6:30pm I got a frantic phone call from DH, he NEVER phones me so I knew something was wrong. So DH says ‘there’s something wrong with Elvis, he looks funny’. I dashed home, took one look at Elvis and screamed at DH to call the vets.

Meanwhile mother is muttering that he looks fine and DS1 is saying ‘I told nanny he wasn’t well but she said she thought he’d been playing with ketchup’.

There were bloody paw prints all over my cream suede dining room chairs, which the children had noticed at 3:30pm but my mum had insisted that the cat had just been playing with ketchup…

Anyway, after a night at the emergency vets – because of course by 6:30pm the regular vets was closed – an operation to reconnect his jaw, rest for his broken ribs and lots of painkillers (and a bill for £856 which wiped out our wedding savings) Elvis was mended. I can’t remember if he was particularly bright before the accident, but lets just say that although he is beautiful he isn’t the sharpest claw in the paw now.

Accident 2: Elvis had been missing for a week. We were about to move house. We had pretty much mourned the loss of Elvis. Then one Wednesday I was leaving the house to take the children to school and in the distance I noticed a black shape progressing along the middle of the road, terminator style, dragging itself by it’s front legs. Elvis was back. Screamed at DH who ran out of the house in his dressing gown, screamed at children to get back into the house (Elvis wasn’t a pretty sight and DS2 not good with horror) and ran down the road to Elvis.

Since Accident 1 I did have the foresight to get Elvis insured ‘YAY’. This time he had broken his pelvis in four places and had to spend three months in a cage. During his three months in captivity Elivs learnt to say ‘hello’ this I guess is because I used to call out ‘hello’ to him everytime I cam home. My brother says it isn’t because of that, he says it is because I am ‘not right’. 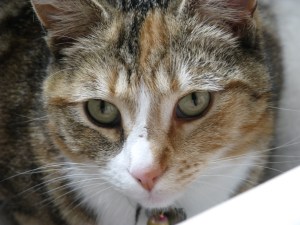 He is now back to bullying Maisy and on the first venture out into our new garden he discovered that the garden opposite contains an aviary…..he likes sitting on the aviary. 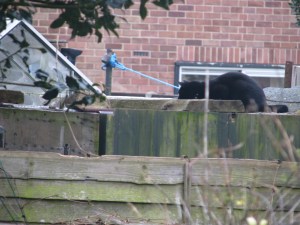 Elvis Had A Friend Round For Tea #SilentSunday

How To Wrap A Cat For Christmas

Leave a Reply to Tweets that mention E is for…… « C is for…. -- Topsy.com Cancel Reply

C is for… Coffee, Cats, Caffe Nero and Customer Service

S is for… 7 Things You Don’t Know About Me