Posted on 1st May 2012 in #charitytuesday 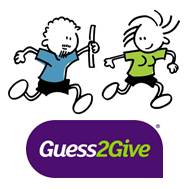 The online fundraising sector has seen a major development this month with the launch of Guess2Give, the world’s first online fundraising sweepstake. Guess2Give works by allowing charity donors to ‘win’ a proportion of their money back by guessing the outcome of a sponsored event. Donors are asked to guess a sponsored runner’s finishing time, in exchange for a £3 donation. 50p of the money will go into a pool which will pay out to the person who guesses closest; and the remainder, after costs, will go to the charity of the runner’s choice. The site is designed to work alongside traditional sponsorship pages such as JustGiving, offering a last minute boost towards a fundraising target http://www.guess2give.com/

The website officially launched ahead of the Virgin London Marathon, with the founders hoping to re-invigorate the fundraising sector at a time when individuals, and charities, are struggling to raise funds. The idea was recently endorsed by Governmental body NESTA, who awarded Guess2Give a grant from its Innovation in Giving Fund in recognition of the innovation it has brought to the charity sector.

The site has been live in beta format since August last year, and over 50 major charities have already signed up, recognising that Guess2Give can offer an important new source of revenue. Charities include Cancer Research, Sense, Scope, Age UK, Parkinson’s UK, Whizz Kidz and Shelter.  Paul Jackson-Clark, Fundraising Director of Parkinson’s UK commented: “For me being part of Guess2Give was a simple decision to make as it will provide a new income stream without any cost or risk to the charity. It also provides a new, fun and slightly competitive element to fundraising and enables supporters not just participants to be really involved in an event.”

Guess2Give is the brainchild of two keen sportsman Tim Parkman and Mark Chandler, who had multiple triathlons lined up but felt they could not ask for sponsorship for each one.  Instead they asked colleagues, friends and family to guess how long it would take them to complete each triathlon, with the closest guess winning some money back. Mark Chandler said “Fundraising has become increasingly challenging in recent years, for charities and for individuals faced with growing minimum sponsorship pledges. Raising money doesn’t have to be about asking friends to sponsor your hobby, bothering people you don’t know, or having them feel that they are being continually pestered. Guess2Give shows there is another way.”

The company, which launched with the slogan “there is another way”, has lampooned charity muggers, or “chuggers” in a video timed to coincide with their product going live. http://www.youtube.com/watch?v=GolMfNrwtNg

Can You Give An Hour? #CharityTuesday

On My Birthday meme – 17th February