A few months ago I bought an epilator and wrote a post about how I got on with it…click here to read.

Although it’s fair to say that the pain did lessen each time it was still very painful, but worse than the pain at the time was the amount of pain afterwards; I found that my underarms were sore for up to a week after each session.

It came to the point where it needed doing ago and I found that I put it off, then put it off some more until it got to the point that my legs were hairier that my OH’s and I realised something had to be done.

So, while in town I popped into a couple of places to see if I could get waxed. It seems you have to plan these things in advance as everywhere I tried was fully booked – and it was blinking expensive too.

OH suggested I try home waxing strips, at £8-10 a box this was a much cheaper option but I was pretty sure it either wouldn’t work or would hurt like hell.

However, as I really didn’t fancy epilating again I decided to give it a go. 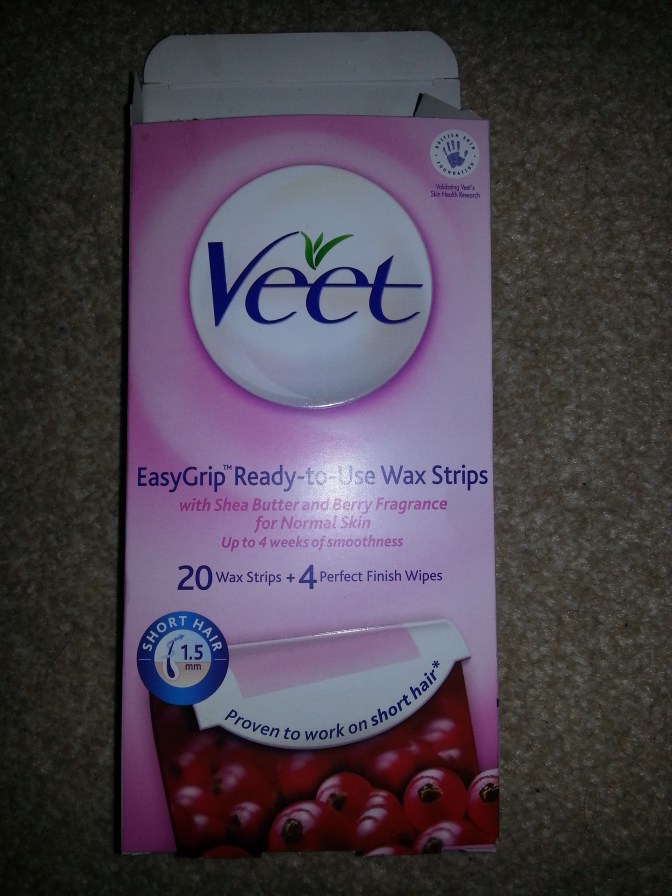 I was very nervous, absolutely convinced that it would rip half my leg off, but it was fine

There was a brief pain while the strip was whipped off but it was quite bearable and there was no pain after!

It was easy to do and the strips smelt lovely too. Even though I found it easy to do myself, my OH offered to help and with him doing it was much simpler and quicker and before we knew it my legs were done.

The pain of epilating my underarms had been borderline horrific so I was pretty tense about waxing them but told OH to carry on regardless and was pleasantly surprised to find that again the pain was really not too bad and only lasted for a few seconds.

I don’t think I’d have managed to do my underarms myself so I would definitely suggest that you have a friend or partner help you at least for the first time but overall I can’t recommend it highly enough.

There is a little sachet wipe thing included in the pack that removes any excess wax from your skin and that has left my legs and arms feeling lovely. I showered afterwards and then applied deodorant without any stinging what so ever.

I am a complete convert, so much so that I am sticking my epilator on to ebay tonight as I have no intention of ever using it again!