My children (both boys, aged 10 & 11) were seriously over the moon when they saw that we’d been sent Light Strike to review. My 11 year old said he’d seen the adverts on TV and thought it looked good. 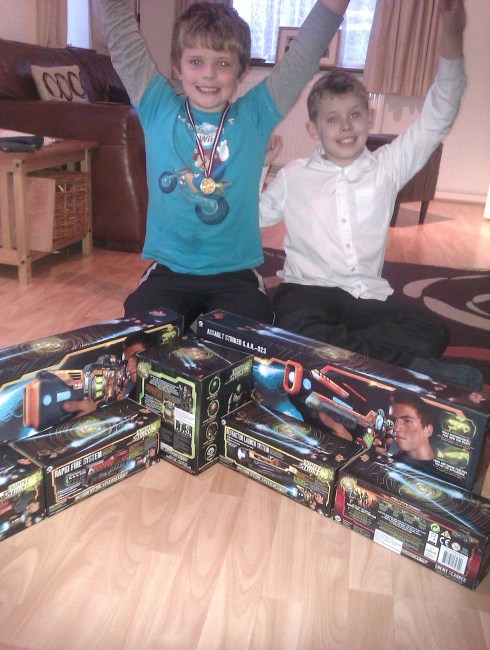 They very quickly got through the packaging and assembled their weapons. The fun actually stopped there that night as I’d stupidly forgotten to get any batteries! So they were left tantalisingly on the coffee table until after school the next day!

So, next day, batteries a gogo and we were off! I have to say I’m not really a fan of boys toys per se but the noises these make are brilliant and I can completely see the appeal. The packing is brilliant and the weapons themselves have a range of phrases and noises all of which are loud, clear and help to get the boys into the mindset of the game. 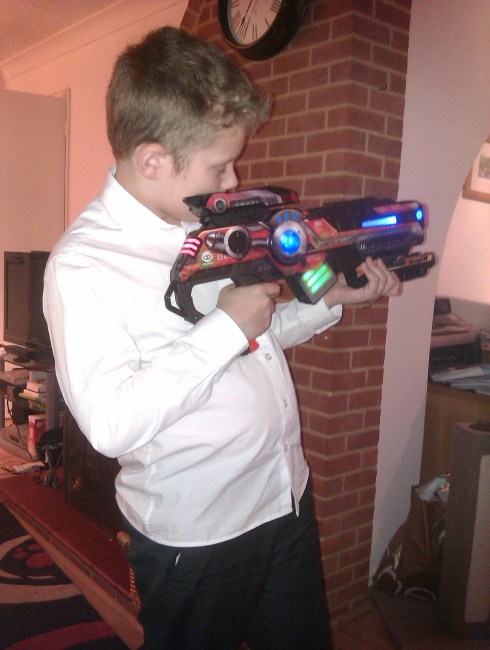 As well as the noises, all of the components light up (hence the batteries!) which adds a whole new dimension to gameplay as you can switch the lights off and play in the dark – or in the garden.

Another feature we all liked is the finger print recognition. Obviously it doesn’t actually recognise your fingerprint but there is an area where you have to press your finger in order to get the gun started – cool huh. 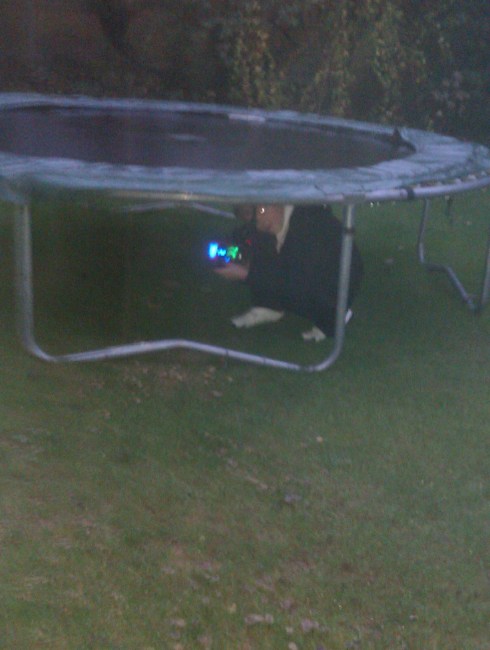 The whole game is very similar to Laser Tag and I can see that the boys will get hours of fun from it in different ways. They are already ‘customising’ the game play as the basic concept as far as we can see is that you have 3 ‘lives’ and each time your gun or your target is hit you lose a life, but the scores are not tallied anywhere unless you do it yourself so it is easy to just re-set and keep playing. I think this feature will be really useful for younger players who might get upset if they were to keep ‘losing’. 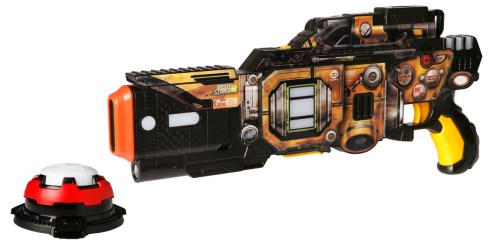 I’ve asked the boys to tell me some things about it, they said:

– the noises are good

– you need quite a big area to play it in

As a mum, I get quite fed up with the constant barrage of online warfare games and the apparent peer pressure for the boys to take part in online games which are aimed at an 18+ audience (even though half their classmates seem to play them…). For me, Light Strike seems to satisfy that boyish need to play a strategy tag game without the children being subjected to all the imagery of the more violent, more adult, online games.

The only cons that I can see are that it takes quite a lot of batteries and that the small ‘targets’ do not clip on very well so my boys ended up not using them, although @liveotherwise pointed out to me that you can buy wearable target vests which would do the job a lot better!

S is for… Starbucks

It’s hot and you KNOW you want it…