In preparation for a recent holiday (during which not only did it rain continually, but also the pool was empty….) I foolishly and unnecessarily decided that I would need satin-smooth legs for the array of bathing suits, skirts and three-quarter lengths that I would be casually wearing (they never even made it out of the suitcase).

My plan was to get waxed, sadly however I underestimated how far in advance I would need to have booked in order to secure a waxing appointment so I decided instead to dig a tube of hair removal cream out of ‘the drawer’. The tube of cream was found to be out of date and unsuitable for underarms so in desperation I looked online for epilator reviews.

I fully blame @2starsandaswirl for encouraging me to buy an epilator because she reviewed one on her blog and as I am easily led I skipped off to the shops to buy one for myself.

My only previous experience of epilation was many many years ago when my cousin got one for Christmas. I vaguely remember touching it to my leg for a nano second and then hurling it back at her and saying she was insane. However, I figured that technology had advanced somewhat since that time and bought my nice shiny box and took it home.

This is the epilator and all its bits and pieces: 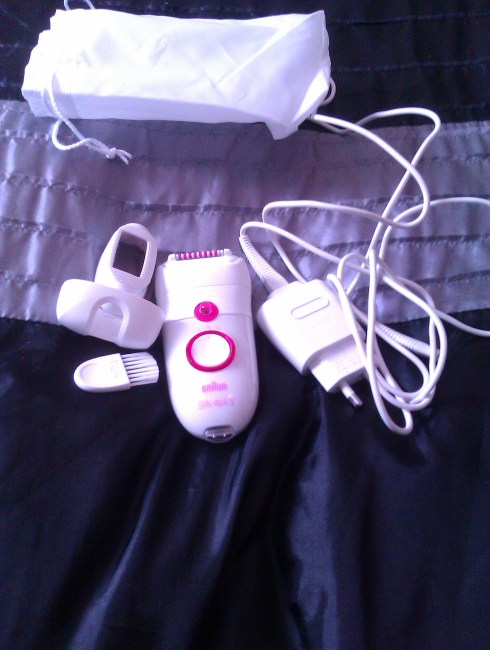 As you can see it comes with a pouch, various heads, cleaning brush and a lead. The only essential thing that it doesn’t come with is an adapter plug, most people have one somewhere in the house if they look hard enough, but I don’t think they are very expensive to buy either.

So, in a fit of stupid naivety, I proceeded to epilate my right leg. I was psyched up and fully ‘in the zone’ ready to ignore the pain. I knew there would be pain because every single review that I’d read mentioned that it hurt – even the actual product descriptions tend to say fluffy things like ‘pain is normal’.

The cons (ie welcome to a whole new world of pain)

As I touched the epilator to my leg it became apparent that pain wasn’t quite a big enough word. Do not, I repeat, do not underestimate the pain! I had tried plucking out a few hairs with tweezers in order to prepare myself for the main event and felt reassured as it barely even stung. Using an epilator however, does sting. A lot. OMFG does it hurt!

With my OH hovering nervously in the background I stoically carried on, the pain just grew and grew. It took quite a while to do that first leg because I kept stopping and starting, taking deep breaths, swearing like a docker and then carrying on.

I didn’t feel ready yet to tackle leg number two so for some bizarre reason I instead decided to do an underarm. Now I’m not a religious lady but sweet Mary Mother of Jesus did that hurt! I kid you not after literally two touches my underarm was bleeding in one place and bruised immediately in another! My OH tried to offer encouraging words at this point but after I suggested that I epilate his f****** **** he withdrew to a safer distance and muttered that I was doing ‘really well’. 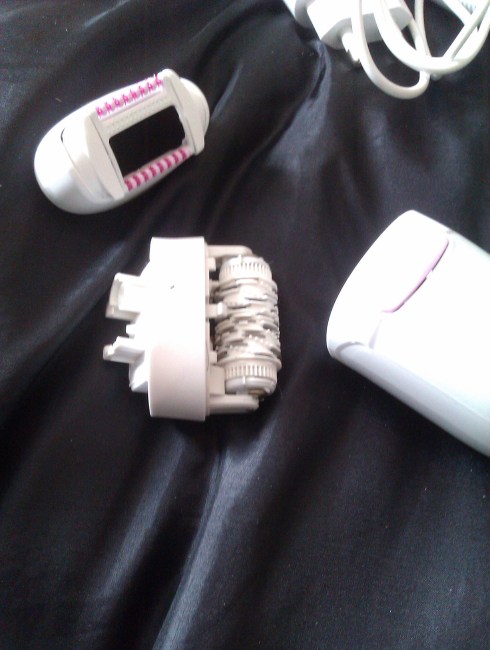 Small confession at this point. Being too lazy to read instruction booklets does one no favours – before switching to underarms you are meant to change the head on the epilator to one that is softer and kinder to more delicate skin. It’s my own stupid fault that I didn’t do this!

Believe it or not, I did, with gritted teeth much swearing and tears in my eyes, complete the task. I then took some painkillers.

Immediately afterwards there was some redness, but not as much as I’ve previously had from waxing and the pain wears off gradually.

The next day the redness and pain had both gone.

My legs stayed hair free for around a week.

Once hair started growing back I noticed two things: 1) there was less of it and 2) it was finer.

My underarms (once recovered…) have never, ever been so smooth!

I’ve just epilated legs and underarms again (using correct attachments!) it was much quicker as there was less hair and, apart from a few hairs that are thick and strong enough to build furniture with, it was much finer and easy to remove.

The pain on the second time was reduced by around 70% and I understand that it gets less and less painful every time.

C is for… Coffee, Cats, Caffe Nero and Customer Service