Why Have They Ruined Trollied and Mount Pleasant?

Posted on 27th September 2012 in Television 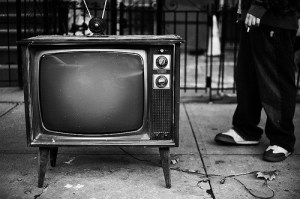 I don’t know if it’s different writers or just bored writers but it’s ruined both of them for me.

Trollied was excellent. With the simpering Julie (played by Jane Horrocks) who has obvious and unrequited love for Gavin (played by Jason Watkins) giving a sweet yet cringe worthy love aspect and the ever funny duo of Andy (Mark Addy) and Kieran (Nick Blood) on the butchery counter, it worked really well. The rest of the cast and crew added to the whole show and it was light-hearted humour. Fun to watch.

Now however, Gavin has gone and Stephanie Beecham is in his place with a bad northern hardass accent to boot. Thus ruining the sweet crush thing that Gavin and Julie had. Mark Addy’s character has been turned into a complete arse and Kieran, who got married at the end of the last series, is still mooning around after Katie which just doesn’t work at all. Superfluous and unentertaining characters have been added in like Neville (Dominic Coleville) the pathetic divorcee, who brings no humour whatsoever to this ‘comedy’.

But the worst thing they’ve done, is create a crude relationship between disgusting shop assistant Colin (Carl Rice) and equally unappealing cashier Lisa (Beverly Rudd, who don’t get me wrong is excellent!). Their relationship is awful, degrading, horrible to watch certainly not funny.

Mount Pleasant was never as funny but it was enjoyable viewing. Dan (Daniel Ryan) and Lisa (Sally Lindsay) had a playful relationship that could seemingly withstand all external intervention; even from the unstoppable Kate (played superbly by Liza Tarbuck). Lisa’s parents were bonkers yet fun, her friends were engaging. Right up until her little dalliance with Jack (Owen McDonnell) it was pure fun.

Now however, the writers seem to have felt the need to give a gritty edge to the programme. The introduction of Kim (Claire Goose) has added a frankly crap edge to the storyline. Lisa isn’t the sort of person who would drop her existing friends for a new one, so doing that was bad enough but to then make Kim into a drug dealing mobster was neither funny nor thrilling. The whole scene at the airport was so lame that it felt a bit like watching poor amateur dramatics.

Do you agree or do you like the changes they’ve made to these programmes? I’d love to hear your view on it.

The Inquisitor meme – who ordered the spanish inquisition?

I have been tagged by @kateab to answer the 10 question meme that is dun dun dun….

Or, as Kate dubbed it – The Spanish Inquisition! 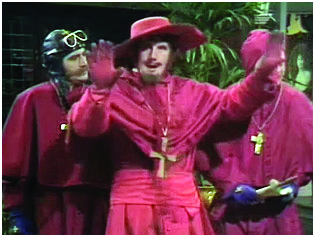 Robert Webb. I’d like to go to a bar in Brighton called something like Etsa/Esca in Preston Street. Hmm just looked it up and it seems to now be called Oxygen Red so I’m not sure if it has the same atmos as the old place, assuming it does though we would go there. And we would talk about whatever he liked! Fingers crossed David Mitchell would swing by, swiftly followed by Russell Howard, Ed Bryne, Dara O’Brien and Punt & Denis!

2. What is the best gift someone could give you (tangible please)?

A house. …oh right, back in the real world huh.

3. Where in the world would you most like to live?

Being a contrary Mary:

I would like to live somewhere peaceful and rural but within walking distance of a town.

I would like to live somewhere that is cool (but not cold) all year.

I do like living where I live now, I just hope they don’t develop it much more as it is starting to spoil it.

4. What do you most enjoy cooking?

I love cooking things I haven’t cooked before, I like the excitement of it. I find that it is only ever the first time that I follow the recipe carefully, after that I get complacent and the results vary! I can make a very good lasagne though.

5. What is your favourite novel?

The Five People You Meet In Heaven – I bought it in a NYC book shop purely because I liked the rough uncut feel of the way they finish their books over there. I didn’t expect much from it, it is a small book and it isn’t the type of thing I usually pick up. It tore through my soul.

6. You have your own personal Tardis, where do you go first?

I’m going to waste this answer. I would go back to a nightclub in 1995 where my ex husband asks me to dance and I would say “no, not if you were the last man on earth, now sod off you poor pathetic excuse for a human being” and then, just to be sure, I would stab him, and possibly arrange for cattle to stampede on him, and then I would hop back in the tardis and feed him to a dinosaur – a proper bitey one not one of those ones with silly little arms who must have been very frustrated.

9. Would you be famous, with all that means?

Some days yes, I’d embrace it and I would sparkle and shine. I’d enjoy parties and I would relish in mixing with the beautiful people.

Other days no, sod off and leave me alone.

10. You are able to learn anything at all, a skill, a language, whatever, what would it be and why?

I am very indecisive, sometimes, and looking back over these I can see a million (and prone to exaggeration) different answers that I could have given and that would be just as valid.

Yay I am done.

So, to tag some others to face the spanish inquisition……

Firstly, of course, as she is lovely ;o) @TheJellyMonster

Over to you, you lovely bunch of people!