I love the concept of being able to see live theatre at my local odeon – think it’s truly inspired and feel very lucky to be able to take advantage of it.

I recently saw One Man, Two Guvnors which I thought was sensational – without doubt the funniest play I’ve ever seen.

Last night I saw The Kitchen. I am genuinely surprised by the glowing reviews I’ve read about it as I found it really quite weak and felt the first ‘half’ dragged on beyond measure. The, albeit well choroegraphed ‘busy kitchen’ scenes just went on and on and on with no obvious purpose – could easily have been a 15 minute scene.

I couldn’t help but notice some empty seats after the interval, it seemed that some people had give up on the play and gone home. I thought about it and actually wish that I had done too.

After the interval the pace picked up somewhat and Paul the pastry chef became a very engaging character. However the scenes between main characters Peter and Monique took a very macabre turn and it became obvious that you were meant to feel sympathy for Peter despite the fact he’d been a bullish, selfish character up until that point.

Monique’s soliloquy about her dream in the slaughterhouse was unbearably brutal and I would imagine that any woman in that audience who was unfortunate enough to have suffered either a miscarriage or an abortion would have gone home feeling quite haunted. In my opinion, it was unnecessary sensationalism to cover an otherwise weak play.

Last night I was lucky to be offered a last minute ticket to see One Man, Two Guvnors, a National Theatre Live production which was broadcast to several cinemas throughout the world!

If you haven’t been to any of the National Theatre Live productions I urge you to book now for the next one which is The Kitchen on October 6th. It is an incredible way to see live theatre – to me it feels like getting front row seats.

I can hand on heart say that last night’s performance of One Man, Two Guvnors was the funniest play I have ever seen. It had me in stitches, literally cannot remember the last time I laughed so hard or for so long.

James Corden absolutely astounded me, having never seen Gavin & Stacey all I knew was that he had a reputation of being funny and to be honest my expectations weren’t that high. But by god were they exceeded. James Corden was brilliant and his audience participation pieces were inspired.

Oliver Chris (who I lusted after somewhat during Green Wing) was sensational. His character and his portrayal of that character was nothing short of genius. I truly laughed so much that I cried. His lines and the delivery of them throughout was hilarious.

I loved all the characters, all the acting was superb, the humour was well timed and well observed.

It cost me £12.50 to see this at my local odeon and I offer up huge thanks to whoever had the inspired idea of bringing live theatre to the masses in this way.

Dimensions have joined forces with ODEON to host an autism friendly screening of new release, Mr Popper’s Penguins, in cinemas across the country.

They want as many people as possible to go along so that they can make film screenings aimed at people with autism or learning disabilities a regular event.

When’s the film on?
The screenings are at 11am on Thursday 11th August.

Which cinemas are showing the film?
A full list of all of the 30+ cinemas involved is available on their website .

Will there be other films shown?
If enough people attend on 11th August it is hoped that ODEON will continue to provide this service each month. For more information about this including details of the cinemas, movie trailers and more, visit the website.

Where can I get tickets?
Cinema tickets can be bought as normal from the cinema in your area or online through the ODEON website . Tickets on sale from 2nd August. Support workers/carers can attend for free with a CEA card. To find out more about the CEA card and how to get one please visit the CEA website.

Supporting people with autism
At Dimensions, they know that autism affects people differently and that’s why their support is different for everybody. They support people with learning disabilities and people with autism. A not-for-profit organisation, they are a leader in their sector, supporting around 2,500 people and their families in England and Wales.

To find out more about how Dimensions support people with autism visit their website: www.dimensions-uk.org/autism 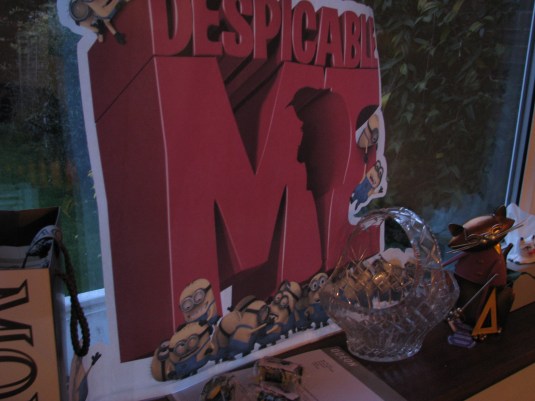 Today I was awoken by the postman at 7am…. Feel a bit sorry for him really as it’s not a pretty site! He handed me a tube. Intriguing. Inside the tube was a large Dispicable Me sticker, 3 minions and a letter!

In case you aren’t aware, this relates to a complaint I made.

I have already had a very lovely response from the General Manger at Colchester Odeon here.

So I wasn’t really expecting a reply from HO as well. At risk of further angry comments (see comments already made on first Odeon post…) although I do appreciate the Odeon sending me the sticker and the minions, the letter they sent kinda indicates that they didn’t ‘get’ the complaint at all.

I apologise for my delay in getting back to you sooner over this matter.

Please find 3 minions. Not sure if they £1 each but the cinema is not allowed to sell merchandise as they have a binding agreement with the Film Distributors.

Despite this I apologise for the disappointment this caused and financial cost to you. I hope this helps ease the discomfort.

Today – 29 November 2010 – I have written a compliment letter to Regional Manager:

I just wanted to drop you a quick note of praise for the outstanding customer service that I recently received from xxxxxxxxx of the Colchester Odeon.

I had a complaint based upon a visit to the Colchester Odeon and xxxxxxxxx acted promptly and intuitively to put it right. I truly felt that the level of customer service given by xxxxxxxxx far exceeded my expectations and I feel it only fair that I write to you to applaud him for his actions.

You have a shining star of customer care within your midst and I hope that congratulate him accordingly.

Conversely – the ‘official’ letter that I received from the Odeon Customer Care team was badly written, in poor English and demonstrated no understanding of the actual issue raised.

xxxxxxxxx could and should be an example to your Customer Care team.

Recently I was a little ticked off with the Odeon, here is why.

However, I have to say that I have been pleasantly surprised by the response – from the Odeon – to my blog.

The other day I received this email:

Firstly, I would like to introduce myself. My name is XXXXXXX and I am
the new XXXXXXXX at the ODEON in Colchester. I have been informed of
a situation which occurred at the cinema when you and your family came to
watch Despicable Me 3D, and although this is my first week in the job, I
felt it necessary to write to you about your experience.

During my time within the cinema industry I believe that the most important
thing is people. Whether it be guests or my team, they both come first.
Therefore, I carried out a search online to find out what our guests
thought of the cinema and their experiences. I came across your blog and
after reading it felt you were completely right in what you were saying.

Although the toy does come as part of the Filmfeast package and cannot be
sold separately, as a gesture of goodwill I would of asked my team to give
the toy to your son given the amount you spent within the cinema. This is
something which I have already discussed with the team here.

Please accept my sincerest apologies for your visit which I agree was not
up to the expected standards. If you have any further issues please do not
hesitate to contact me on this e-mail address or in the cinema.

If you would like to forward me your postal address I would very much like
to offer you and your family complimentary tickets for a return visit to
the cinema.

What a lovely email. You know what I liked best about it? I liked the fact that he had taken the time to google and see if there were any good or bad comments being made about his new branch, the fact that after finding my blog he then obviously went away and looked up my customer record to find my email address and then took the time to sit and write me a very lovely email.

So my faith in humanity (a little strong?) and indeed good customer service is now restored!

Today the Odeon have displayed appalling customer service. I am actually quite surprised as it would have been incredibly easy for them to rectify the situation and turn it into excellent customer service – but they chose not to.

Today we took the 4 boys to the cinema to see Despicable Me. As a ‘premier’ member I booked online before we went. The tickets cost £47.70 including the extortionate booking fee. 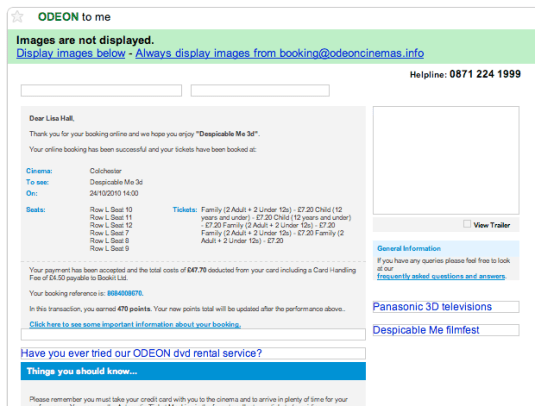 We watched the film – which incidentally was very good – and once we came out the child who hadn’t bought a ‘film feast’ bag realised that he didn’t have a ‘build your own despicable me’ toy. The other 3 boys had received one free in their bag.

We left the counter and approached another member of staff – I asked if she was a supervisor and she said she was. So we again explained to her and asked if we could buy a toy. She said no. I asked why and she said it was because they don’t have a code to ring it through the till because they are given away FREE with the ‘film feast’ bags. I said could we pay for a drink (so they could ring that through the till) in exchange for a toy? She said no.

I said I thought that was very unreasonable, that we’d spent nearly £60 in the cinema today and that the child hadn’t realised that the toys were in the bags or he’d have bought one of those. She again said no.

I asked her if I wrote to Odeon HO and explained what had happened, whether they would agree with her. She said “Well if you do the letter will just come here.”

I asked if there was a manager on duty – she said she would go and get the manager. She came back a few minutes later with the branch address written down and said the manager also said no.

I said to her that I would buy an entire ‘film feast’ bag in order to get the toy and then write and complain to the Odeon – she said again that the letter would just come back to her anyway….

So, we bought an additional ‘film feast’ bag just to get the toy.

Meaning that we actually spent £62.56 at Odeon today.

Guess what Odeon – it wouldn’t have cost you anything to have just given my son a toy. But we weren’t even asking for that – we offered to pay.

UPDATE: I should add to this that I received a very lovely and genuine reply to this blog post from the new GM at my local Odeon. You can read what he said here.