Update – on 12 September 2011 I am very pleased to say that a new home was found for the cat! Huge thanks to all who RTd and helped to spread the word.

I am currently fostering a beautiful stray cat (in Colchester) who is in need of a home. She is a lovely cat, likes being fussed, brushed, stroked and sitting on laps. Wherever you are in the house she will want to be near you. Ideally, she will need to go to someone who is experienced with handling cats and who is prepared to be patient with her. In return you will receive a beautiful cat who is a real home loving girl, very affectionate and loyal. 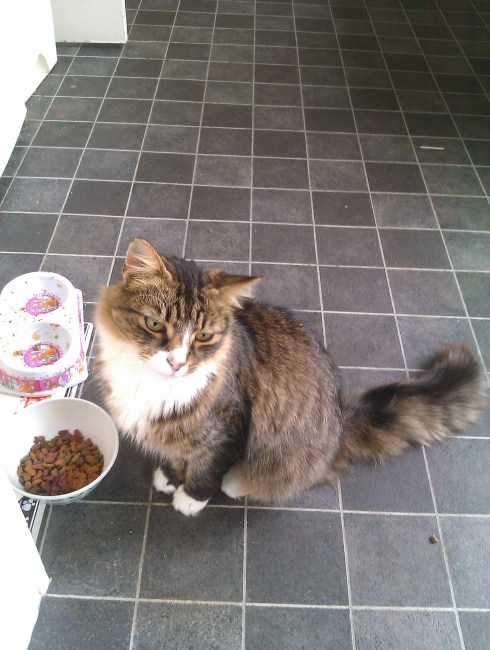 She came to me about 2 weeks ago when I was on holiday in Carnforth (Lake District), we were staying in wooden lodges and could hear a cat crying so looked outside. Basically she hasn’t left ever since then! When we first saw her she was incredibly hungry and thirsty. She also had tatty, scabbed ears and upon picking her up it became apparent that she has 2 broken ribs.

We took her to a nearby vet who confirmed that she was NOT micro-chipped and that they had not had any similar cats reported missing. After a very quick look, the vet said she believed the cat to be female and possibly around 2 or 3 years old. 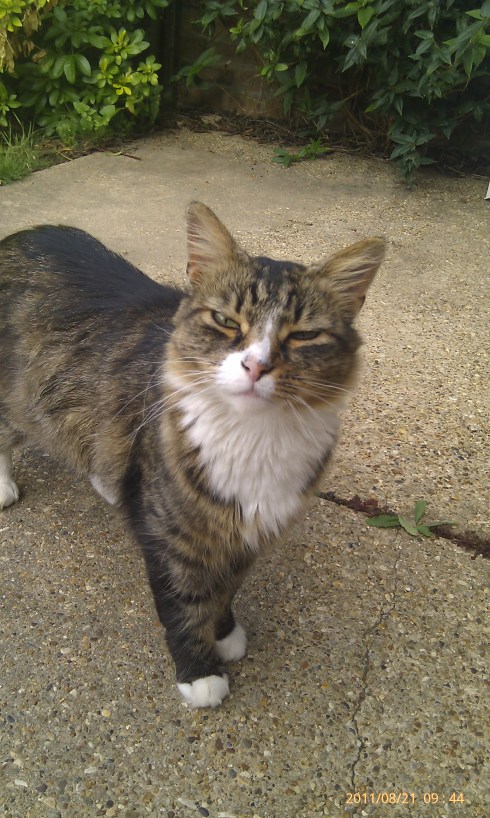 We rang several other nearby vets and rescue centres, none of them new of a similar missing cat and all the cat rescues were full. The  reception staff at the park where we stayed said they weren’t aware of a stray cat, however a gardener did say that a cat had been around for a while but that it wouldn’t go to any of them. We decided we couldn’t leave her behind and so took her on a 5 hour trip to Colchester – she was as good as gold for the whole journey!

So, why aren’t I keeping her?

Unfortunately my existing cats haven’t taken to her. One of them is terrified of her and currently slinks about the place trying to avoid being seen and the other one is only coming in for food – if he comes face to face with Tootsie he is very hostile and lots of growling, hissing and eventually fighting ensues. Tootsie always wins as she is big cat who has clearly lived rough and my soft cats are no match for her! I would love to keep her but cannot as it is clearly causing Elvis and Maisy a lot of stress.

I think ideally it would be best if she could be an only cat – although to be fair to her it is my 2 cats who start the fights off, she seems happy to mostly ignore them until they start on her.

Her ears have now healed up and the fur is growing back nicely, she really is a very attractive girl. I did wonder if she might be a Maine Coon cross although I will add that a couple of people have said they don’t think she is. To my untrained eye she seems to match the description very well and is much bigger than my other 2 cats with large paws, tufty ears and a huge racoon tail!

Her fur, although medium to long, is in very good condition and she hardly molts at all compared to my other girl cat! 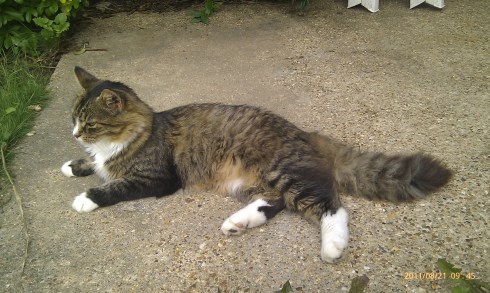 I think probably as a result of being mis-treated at some point, she will occasionally swipe her giant paws at you or on rare occasion bite if she feels threatened. This has lessened every day since she first came to us and I think it will disappear completely in time and with trust. For this reason she must go to an experienced, kind and patient home where she can feel secure.

Of course, being a stray she will try and eat ANYTHING! I’ve seen her attempt chinese takeaway, shortbread and sweetcorn…

She is a very loving lap cat, fully toilet trained, very clean, very affectionate and likes to be either in the house or garden – she is always within calling distance.

Can someone give this lovely lady a forever home and a second chance at life? 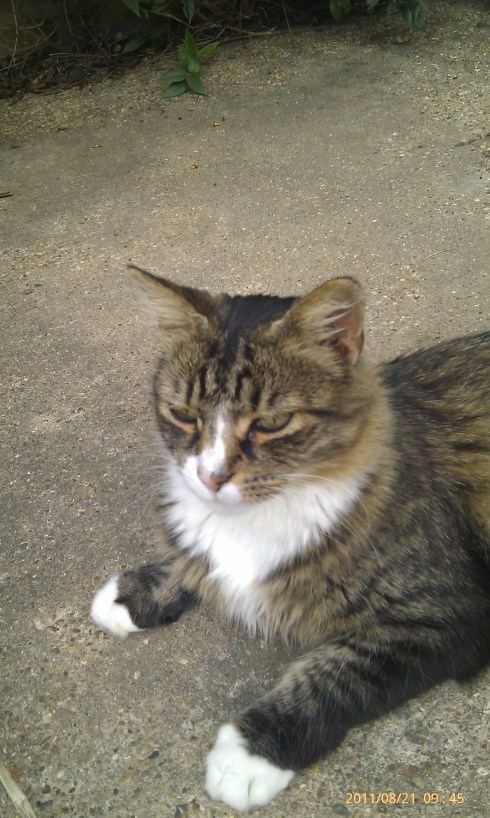 V is for… Volunteer

Am a bit late with my entry for Josie’s Writing Workshop. Like most people (have been reading through the entries!) I have gone for ‘5. Pick an emotion that best represents your state of mind right now and write creatively on that theme.’

The emotion that represents my state of mind is ‘meh’, yes yes, meh is definitely an actual emotion – don’t bother checking the dictionary, it’s there ok!

Am feeling ‘meh’ because sometimes I just don’t feel that I give enough.

I’ve always said that if I ‘won the lottery’ I would:

a) buy my dad a house with a big garden

d) buy myself a house

e) do volunteer work for charities

But then it occurred to me that I could actually do volunteer work without having won the lottery. Ok, so I don’t have the time or money to devote my life to it, and I can’t change the world even a teeny bit but I could do something.

So, for the past 6  months I have been a volunteer for a charity called Cat Chat. Now, in my head this should involve baskets of kittens – each of a different colour, but sadly it doesn’t

It does, however, involve lots of pictures of cats which is nearly as good! What I do for them at the moment is make their quarterly newsletter, which helps to spread the word about their good work and lets people know about rehoming success stories, as well as highlighting those poor kitties who just can’t seem to find a home. If you do happen to be looking for a feline family member their rehoming pages are a good place to start.

If I ever did win the lottery and could afford devote more time to volunteer work I’m not sure what I’d chose to do. I’d like to help poorly children, or children affected by sadness whatever the cause. Having experienced the shock of having my world turned upside down – I’d like to help support women who find themselves in a scary world after a partner has left them. Today, after reading the article about single dads in Stella magazine, I’d have to say that I’d also like to help men who find themselves in that situation too. I wish I had the brains or the cash to help find a cure for cancer. I wish I could stop bullying. I wish I could cure depression. I wish the world would share it’s money so that we don’t need action aid, or water aid, or even band aid! I wish I could make paedophiles – JUST BLOODY STOP IT. But in the meantime, I’ll settle for cats cats and more cats!

And squash the feeling of ‘meh’ as best I can.