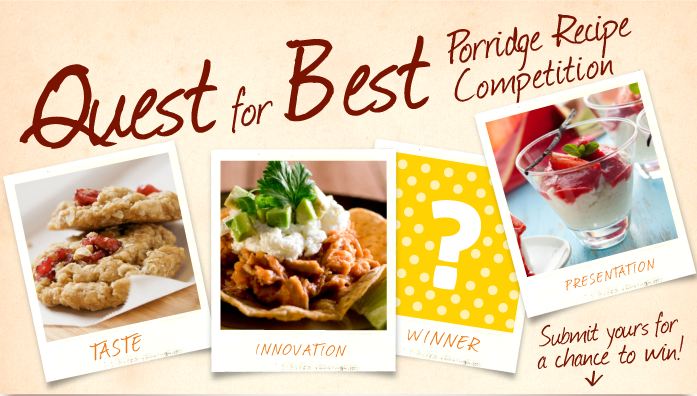 Win 2 VIP Tickets to Taste of  London Festival 2013, plus one night’s accommodation in London with breakfast  and travel.

For more information on the Golden Spurtle  Championships and to read the full rules, visit the website http://www.goldenspurtle.com/competition/rules/

The 19th annual World Porridge Making Championships take  place on Saturday 6th October 2012.  As Britain’s longest established miller of oats, Mornflake are inviting everyone to suggest recipe ideas to be entered into the competition.

They will select their favourite dish together with Anna Louise Batchelor, aka The Porridge Lady. The chosen recipe will then be cooked by The Porridge Lady for the 2012  Championships under the Speciality Selection category.

The Porridge Lady said: “I am really excited to see what  recipes people will enter.  Oats  Oatmeal are really versatile so I  am hoping that we see some creative ideas. Oatmeal can be used for more  than just basic porridge for example an American entrant last year entered  Black Bean Porridge Patties, which looked delicious.”

RUNNERS UP: A  Mornflake hamper of goodies will also be awarded to two runners  up.