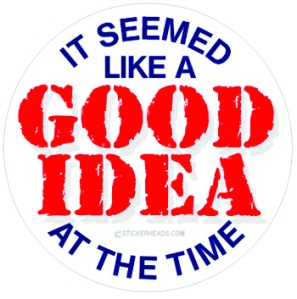 I am honoured, emotional, surprised, unprepared and deeply grateful to be one of the very first recipients of the ‘It Seemed Like A Good Idea At The Time’ meme award.

This is a BRAND NEW meme created by Jon in his great blog.

First, and foremost, in order to abide by the rules, I need to thank Jon for the honour that he has bestowed upon me. “Thank YOU Jon”

So here are the rules for this one:

1. you have to thank the person that tagged you by tagging them back!

4. Tell everyone 5 things you did in your life that seemed like a good idea at the time!

5. Nominate 7 other people to do the same and link to there blogs.

7. Let the people you have nominated know.

And so, my 5 things that Seemed Like A Good Idea At The Time:

1. In a nightclub, guy comes up and asks me to dance. So I ask a friend to hold my drink and I say yes…. reason this was a mistake? See A is for…

2. At school, age 15, my boyfriend was 23 (should stop that one there really!) he used to drop me off at school in his white porsche and kiss me goodbye in the school car park. CRINGE.

3. I once let someone go that I probably shouldn’t have. Trouble with that is that they chose to go so I guess keeping them would have been kidnap?

4. In the car park where I park for work, the concrete posts are in a ridiculous position for anyone who is unfortunate enough to have to park a car in there…you have to swing round REALLY close to the post. Anyway, will let the picture below do the talking on this one – needless to say the car on the right is mine… 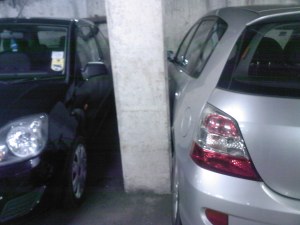 5. Hmmm, number 5. I’m really stuck on 5. Don’t get me wrong – have done loads of stupid things – maybe, no, what about, oh no, erm – ok, I once went out with a guy who was a trainee accountant, but, told me he was also in the SAS… and I believed him. Yes, yes, as it turns out he was married.

Go for it guys xx